I had spoken with Julie earlier in the morning for a bit longer than usual about our various plans and current affairs, and now I was getting my highly-esteemed, shiny chrome-plated Pavoni espresso machine cranked up for a morning Peru blend with the usual 2% organic Clover Dairy’s half cup of milk. The very bright sunny morning was a bit shocking after so many rainy overcast days this now mid-spring season, which has already become the wettest season on record in Northern California. For some reason I impulsively happened to look up and out the east window on my right hand and noticed a mid-sized bird on the wing, about 50 yards away, flying a diagonal course towards the house. I immediately noticed that this was not a common bird to see in this area, so I looked more carefully as it approached. It was smaller than a Raven and larger than an acorn woodpecker commonly seen at this higher level in the air lanes habituated by my local feathered bipeds. I could see the curious white markings on the underside of its wings, of a kind I could not remember ever having seen before.

This could get interesting, I thought, as I remembered I had left the telephoto lens on my trusty little camera from a successful quick shot of a clever and cheeky ground squirrel that had climbed to the top of my house totem pole, an old snag left over from a forest fire many decades ago, to get its portrait taken. As soon as the grayish flyer made its way to the top perch of a recently expired Ponderosa from the drought, near the southeast corner of the house, and after setting its position, I made my way into the living room to get the camera and make my way outside to see if this pole sitter was still going to be there when I arrived. It was. I cranked up the camera and quickly twisted the function rings for max zoom at infinite distance and stopped all the way down.

I put the bogey at mid-screen, and not wanting to waste any time betting on the whimsical behavior of always jumpy bird life, I squeezed off the first shot. The back-screen viewfinder on this camera is not particularly good or bright enough outside on a sunny day, but I thought my chances were good enough. I couldn’t really get the orientation of the bird because it was too far away to actually see in the setup (this is not a DSLR or even mirror-less camera), except to notice it was there. I waited a half second and squeezed off another. I was having to hunch down a bit to remain in the shadows while still having the perch in view above the roof overhang, which was not exactly comfortable … so I looked around and moved back on the deck to get under another roof overhang that would allow for a full standing posture while steadying the camera on the nearly redwood post. I arrived and squeezed off a third shot, beginning to feel confident that I would have at least a few shots to tidy up in “post production” (no pun intended until noting).

At that moment the barely visible bird talent made a short series of three calls, clearly those of a dove that I had often heard in the bushes on the hill behind the house, but I had only succeeded in seeing the originator of such calls scurrying around on the ground a few times in all the years of living out on my Sierra ridge. These were clearly the loud and distinctive “coos” of a dove, delivered the moment before this lovely charmer jumped up and flew away to the east, the direction from which it had come just a few moments before. So, the three coos were a good match for both the date and the number of shots I had taken … just in time.

I walked back into the house to sit down with my spare continental breakfast and take stock of the next amazing description of a civilization in my Star Elixirs book done by my old friend Michael Smulkis, now recently deceased. I mused to myself, “I’ll have to call Julie and tell her this dove story—she always loves to think of doves, the symbol of our Pleiadian home world.” Another curious thing about this novel perched-bird sighting, I had noted, since Julie and I had briefly discussed this in our morning update, was that the planet Mercury was about to “go direct on its station point” in about an hour. Lots of curious things always happen on these Mercury station points, either as it goes retrograde (now having a more widespread understanding among hip folk) or turns direct, like today. In fact this dove caper, I had realized, began at the very minute (9:33 a.m.) of the station point! This really was amazing, and unlike anything I had ever witnessed in my escapades in birdland! I chose to wait a few more minutes before calling Julie so I could finish the last bites of my breakfast and have a moment to ponder why this might be happening—of course, I could already think of several situations to which it might apply.

But no need to wait any longer; the phone was ringing; and it was the dear sweet beautiful lady herself, calling with a tone of excitement, to tell me that she had just come back from our lot in Pagosa Springs, CO where three large loads of dirt were being dumped by truck for the eventual base of our house foundation. I let her describe a few more of the details before telling her of my rare and likely propitious dove sighting just a few minutes before. It only took us a couple of moments to realize that my bird sighting and photo op had occurred at exactly the same moment as her trip out to the lot to christen a load of dirt being delivered to our building site … and indeed at the very moment of the Mercury Direct station point (!). Excitement was in the air and on the ground.

Nothing quite like this had ever happened before: that is, simultaneous events, one for each of us, timed to coincide with a super-classic astrology aspect that we both always note with some anticipation and gravitas. It was also true that I was just finishing the transcription and edits of our Telepresence Conference 64 of the *Five Star Series* … which was about “revisioning Astrology” (!). Well, this would be “one for the books” … one of our very own books in the series of bird antics with a highly suspicious backlog of meaning for our navigation through the twists and turns of life. We finished our call with ‘high fives,’ and I soon finished my breakfast and went to my media computer to download whatever I may have gotten in my morning mini-shoot. Here they are: 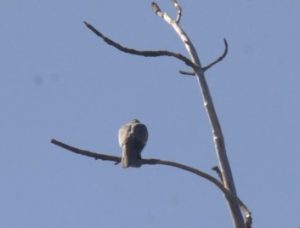 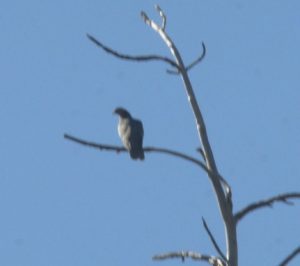 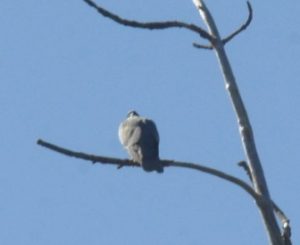 This dove (called “Maia” by Julie) looks to the east, then towards me, then back to the east.

It’s a bit uncertain whether this somewhat rare local bird sighting is that of a dove or a pigeon, which are in the same family and very similar in appearance, with possible hybrids in any event, but this was the first time in memory I had ever spotted a perched bird of this kind on my property in all my years here. It is, however, just the kind of arranged bird appearance that our ETs have used to get our attention in the past, for one reason or another, this time perhaps as a little trick to simply show us that they are “checking in,” knowing that we are both into one of astrology’s now most famous tropes, Mercury station points.