Review of Fire in Middle by James Ernest Brown

The subtitle of this extraordinary new contribution to the ongoing task of decoding ancient Egyptian culture, particularly regarding the Great Pyramid, clearly states its bold claim: “The Mystery of the Great Pyramid Solved.” And after forty years of research, reflection and now richly illustrated publication, James E. Brown, whom I have the good fortune to claim as a most insightful, delightful and enterprising acquaintance, appears to have delivered on his objective. Among the well-organized and well-written chapter presentations are many valuable film-camera photos dating from his initial trip to Egypt with family and investigative team in 1978, many of which show museum artifacts and tour destinations no longer available for viewing by researchers or anyone else … for various reasons.

Some readers will naturally be suspicious of such zealous claims of new Great Pyramid “solutions” because there has been recent publicity for some similar reports by other technically-inclined investigators, also claiming successful interpretations of the Great Pyramid’s main function—as the most grand of the more than one hundred pyramids along the ancient course of the Nile River near the Gizeh Plateau. But for my part as an amateur investigator of ‘pyramid magic’ from the time of Peter Tompkins’ coffee table book on same a half-century ago, I must admit that for the first time, I think James may have finally understood what was going on there (!).

James’ first clear victory is having securely slammed the door on the prevailing sham explanation—still in vogue as conventional wisdom, even among today’s official Egyptian tour guides … of pyramids as burial tombs. However, there are no mummies, no tomb artifacts, no tomb decorations … nothing tomb-like … so let’s get over this 19th Century Egyptologist fantasy already. Right on, James (!). And there are so many relevant 20th Century technological details hiding in plain sight in, on and around the pyramids, which tell its tale better than any made-up fantasy (and pay heed before any more of it gets destroyed by attendants trying to “clean it up” in a belief that a sanitized pyramid will please the essential stream of tourists needed by the country’s economy). He has shown some amount of Indiana Jones (Colorado Brown?) flair —to see the monumental architecture, the relevant symbols and artifacts and finally connect the dots into this very-likely correct technological interpretation, standard science notwithstanding either. 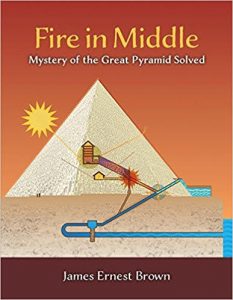 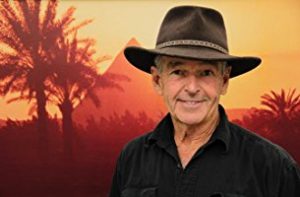 It turns out the ancient Egyptians were extremely savvy about low-voltage DC electrical phenomena, particularly regarding healthful relevance for all life forms, something our modern scientific investigators also discovered and explained (Maxwell Equations, Bohr Atom, quantum theory) but sped by very quickly as if this low voltage (but very complex) life chemistry weren’t such a big deal. But ah, it is a really big (and small) deal most worthy of appreciation. Basically, the notion is that the “life force” as the fundamental condition of all livingness, is electron flow—at voltages amenable to basic cellular operations—which can most easily and effectively be widely distributed via water flows—as electrified or ionized water. In Egypt it was water taken from the Nile where salt water intrusion from the Mediterranean met with fresh water flow down the Nile in the Gizeh region, which was taken into the base of the pyramid by extremely clever and still little-documented means, involving accurate angles and orientations on a grand scale of earthworks, caverns and wells that appear to have operated somewhat like a huge hydraulic ram, allowing for a number of continuous low-voltage utilities dispensing: the piezo-electrified water (the main task performed inside the pyramid), charging salt-water batteries using the electrified water stored on premises, and then returning the energized water back into the Nile for “life more abundant” for all the people, animals and agriculture downstream. Along with the temples and tombs, ancient Egyptian civilization appears to have been built around these water-enlivening pyramids.

A few modern investigators have suspected that some kind of industrial “power plant” operation had been going on inside the pyramids, which James has more accurately specified and documented, from clues like the abundance of sodium chloride (common salt) that encrusts many of the internal tunnels and causeways, but his careful and persistent survey of all the evidence has allowed him to come up with the more advanced and very likely correct interpretation: the Great Pyramid was engineered to be an “industrial scale” chemical laser used as a water treatment facility by pressurizing or stressing three large red Aswan granite plugs in the sealed “Ascending Passage” to continually produce electrified water passing by on the other side of this crucible, coming up along the “Descending Passage.” His analysis of the King’s and Queen’s Chambers as the origin of the two coherent chemical components driving the lasering process, will forever change how we think of what was happening inside the Great Pyramid—and what these ‘Electric Ancient Egyptians’ really knew. They knew so much more than their pre-modern literary chroniclers could have ever given them credit for!

Of course, who might have been capable of designing a megalithic facility like this with its sophisticated chemical laser reaction process ported to more than a hundred pyramids in ancient Egypt (James reports that some aspects of the many pyramids appear identical, even if there are also major differences in some of the interior structures …), is still a mind-boggling mystery, however long it may have taken to build them while knowing the fine, almost impossible level of detail required that would have to be integrated in mega-stone work construction to make truly massive engineering projects like this work with any degree of efficiency. It’s really more on a scale like our modern nuclear power plants, and in some ways with a similar exaggerated simplicity, but electrifying water rather than merely boiling it to make steam to turn turbines is even more sophisticated in some ways—and a great deal safer and more appropriate—since higher voltage electric power can easily be produced directly and locally now, using the photoelectric effect, as in solar panels, roof tiles and the like with power inverters. The path, to me, would seem to lead back to Ancient Atlantis or some other earlier (ET sourced?) master civilization, but that is a topic for another day.

So, whether you are a veteran pyramid sleuth looking for the next big de-construction/ re-construction breakthrough regarding the Great Pyramid enigma or merely a more recent enthusiast, you will not be disappointed with the conclusion or the lead-up narrative aided by several hundred interpretative images in this beautifully finished book length effort by James E. Brown, assisted by Julie Loar and his talented family. More detailed analysis by chemical engineering specialists on various aspects of the Brown chemical-laser pyramid theory is now needed to hone James’ ideas into finished resolution, I think, but the proof of concept has now been given and the kudos goes to this super-sleuth for understanding what had remained hidden to everyone else till now … while always seen as an eccentric “wonder,” yet believed to be merely a primitive ritualistic “Stone Age” burial chamber … for as long as anyone can remember. We only wish we could have seen the Great Pyramid in all its glory with the Sun gleaming off the full hundred-inch thick mantle of white limestone!