I had finished looking at videos for the early late-show part of the evening and wheeled around in my ergo chair from the Dell Precision running Windows 10 as my main online surfing computer to the laptop media computer on the other café table with its sculpted keyboard as my main writing workstation when I was quite surprised (to say the least) as I reached for my copy of Julie’s and my first book of our *5 Star Series*, The Star Table Trance Transmissions, that was sitting open on the window sill to my immediate left where I had left it earlier in the day … and saw a quite lovely light green praying mantis sitting just above it, clinging to the outside window glass, motionlessly looking back at me.

I was also quite amused to see this rather large insect that would remain in that position for the next 20 minutes or so since I had been thinking about the purported existence of ET “Mantid Beings” which had been recently mentioned in one of our latest Telepresence Conferences, said to be living on a planet around Proxima Centauri, the nearest star to our Solar System, only four or five lights years away. Lysah came to mind in this regard, one of my Pleiadian genetic-family contacts, whom I had also been reflecting upon earlier that day, yesterday October 27, 2017, whose relationship had been explained to me in our session 13 in that book as actually being my great niece. So, this struck me as a cleverly arranged synchronicity so that I would know that she, and probably others, like her father Asafah (whose father and I would be brothers), were following my increasing excitement with the progress I was making on the detailed outline summary booklet I was making of the Star Table book, now having arrived at the last chapter, Telepresence Conference 14.

There it was, a large greenish, highly-articulated spy-like apparatus, obviously more than your average “bug,” but apparently unafraid of being so close to all the bright lights on the other side of the glass. It only took another brief hesitation for me to realize that this situation, whatever it might mean, would be a great photo op. I reached around to the other table for my little Sony hybrid camera, which fortunately had a charged battery, and surveyed the lighting aspects on my guest talent. There were reflections on both layers of window glass from multiple lights in the room, and I stood up to survey the scene from various angles, popped up the flash and began to squeeze off some shots. 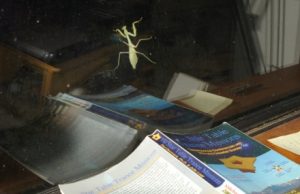 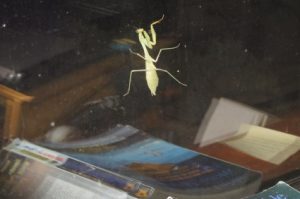 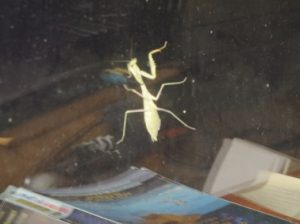 It was a fascinating scene with all the multiple reflections and flashing lights from my thumb drives, and I moved my little keyboard lamp around to highlight its underside since apparently this charming visitor was not in a hurry to leave. I fired off a couple or three more … 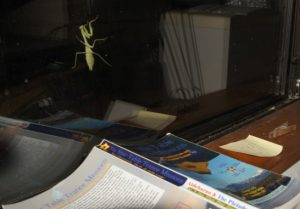 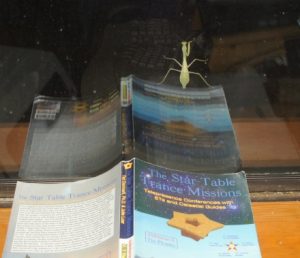 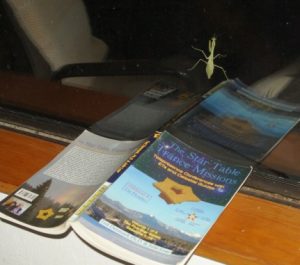 Not to miss any nuances, I next turned to my iPhone camera and shot a few more to have one for a quick texted image to put out for Julie’s morning amusement, which I did, and she loved it as I found out this morning. I won’t reproduce any of the second series since they are similar (with even more of the reflected image reverberations), but Julie got it all as the enthusiasm in her voice showed. I explained to her that I had read a news story the day before about the newest scientific technique for attempting to determine if exoplanets might contain life by spectrographic analysis of the upper atmosphere—and the example used was Proxima Centauri (!). As noted, it was only a short time ago that she had described the greenish 8 foot tall Mantid Beings as being native to a planet in that system. In addition I had sent Julie a link to a new Dark Journalist interview with Daniel Liszt and Gigi Young, an attractive woman who presents herself as an “intuitive coach,” specializing in knowledge of various ET civilizations in which a drawing of a Mantid Being is shown and discussed. So, it was a mantic mantis day, to say the least, with the “real thing” showing up at last … not likely on its own, but probably with a little help from my dear “great sister” Lysah. As I told Julie, it put me in a class with Carl Jung and the famous scarab beetle that appeared outside his window while he was consulting with a client on a related subject and needed to make a point about synchronicities.

It was Lysah that I began to remember, also from an earlier TC dialog, when I had finished taking some pictures, telling me not to be “just amazed” but to pick up the phone and try to get the message. I had told her I would try to remember … well, it occurred to me that this was one of those times, and I needed to look for a message—if there was one beyond this rather amazing appearance of the Praying Mantis itself. I looked out at what I call the “Love Creek Gap” where I had seen many of the unusual lights and clouds in years past, in which Lysah had admitted to having a hand. But it was “just darkness.” I sat and reflected a little longer, and then it occurred to me I should go outside for a better look around. It was an easy sneak out the door and onto the west deck with its clear view of the northern and eastern vistas: I looked around but saw nothing except The Pleiades culminating directly overhead on the prime meridian (!), as exquisite a sighting as I could ever remember—in fact I don’t think I had even seen the Pleiades that high in the sky before, as now just before midnight on a very dark night with Sun in Scorpio along with its new moon on the other side of Earth. I surveyed the sky from the glorious Pleiades down to Aldebaran, the “Bull’s Eye” of Taurus, looking for the Hyades in between, but there was not much to be seen of them—my eyesight was not as good as it had been a few years back when I could remember seeing about 10 of the individual stars in the Pleiades without glasses.

As I continued to admire the bright pulsations of Sirius and the scintillations of its nearby star scape, probably the most well-known of any part of the Zodiac, I happened to be gazing again at Aldebaran when a shooting star went by exactly in front of it! It wasn’t a dramatic flash, as I have seen many times from my deck under a dark sky, but just a tease … for what became the next long bright flash just a few minutes later, a bit lower in the sky, going through a long arc from left to right. Later, Julie would remind me that the date for the Orionids meteor shower had been only three days before. It was a beautiful warm night for short sleeves, and I decided I should take a little more time to look at the magnificent sky, but using my new binoculars with their rubber eye cups that completely shut out the side light. I went back into the house and headed for the panoramic panty to lay a hand on the zippered case to retrieve them and get back on the deck in less than a minute. Now I could sight the Pleiades and see at least 20 discrete stars, including the brightest one, Alcyone as well as my highly imagined Taygeta, where our Pleiadians have told Julie and I we are living out our double time lines as Rhi and Phindar. I had put out my big coffee-table picture book by Timothy Ferris called Galaxies, setting it on my dining room table about a week ago with its open center-fold of the Pleiades. I looked for the blue light reflections on nearby stellar gas and dust and equal-armed star bursts around the Pleiadian stars as shown in the telescope picture, but could not resolve them, but of course, the image through the binocs was very small compared to the blowup in the book, extending across two large pages.

Well, there it all was and is, the magnificent vastness of even our local neighborhood in an outer spiral arm of the great Milky Way, I thought as I lay in bed after shutting down the house for the night. I had picked a great night to get out for a south-eastern sky survey—rousted out by a green bug on my window—but it was a wonderful stimulus to appreciate, once again, the most inspiring scene to be had, equally by anyone on Earth (except, of course, for places like New York City and other metro areas having bright light pollution where no stars are ever visible! Could that be the core reason for such insularity of over-populated Earthumans?) I often think of Semjase’s remark of the Earth being so dark … but maybe this is one of our few advantages of such a (literally) dark planet with only one nearby star—the dark night sky to see all that exists: constellations and galaxies of stars all the way out in every direction. Since it would be so much brighter from anywhere in the Pleiades, as Semjase implies, it could be one of the most exquisite perks we have here on Earth compared to viewing possibilities of even the native Pleiadians on their (our) home planet Erra. It was late, and I quickly dropped into a deep sleep after a very memorable exalted feeling of being alive, which Joseph Campbell once noted is what everyone really wants to feel (and I will add, in a living universe) so much more than … merely having a meaningful experience.

P.S. More synchronicity: A second Praying Mantis appeared inside the house a few days later. I also noticed that Hilarion in his Starlight Elixirs book notes that the real Mantid beings are native to the Rigel System and are among the four main groups of “negative beings” who have come to Earth.  Yikes!