You’ve landed in cyberspace “somewhere over the Rainbow” related to the life and times of Ted Denmark, mostly living in the California Motherlode for the last thirty years (before that, Berkeley, Austin, Boulder, Zurich, Copenhagen and more recently in southwest Colorado) and engaged in the main task of publication: with a recent pair of paperbacks, Star Table and Star Family in the *Five Star Series* (on Amazon), several ebooks in three ongoing book series, a few essays, older short stories, and “someday” an old pome (or “poem”—pomme is French for apple—I am a small orchard-tree farmer … or was before the California drought, now mostly with only fond memories of ripening Fujis, but you may still try a few crisp digital bytes from the mass-memory tree …) and the occasional “esoteric studies” essay, book review, and picture shoot (more to come with my amazing new Sony Alpha 6500 camera) as well as the main fare of numerous ‘Telepresence Conferences’ to be sampled here before the full collections appear in long-form publication as paperbacks. So, have a look around … I’ve finally fixed a leak in the website bit-bucket and am now getting ready to try to make it look better, too.

Of course, I’m hoping this site will become a destination for readers to check out, rather than the ‘flash and dash’ or ‘click and a promise’ or ‘glance and a chance’ … crew of monkey-finger swingers, sampling screens crawling with colorful fluff that I’ve heard are mostly out and about there in the new Century 21 screenland.  Well, perhaps you can take a pointer: for a very modest amount of eBay cash, you, too, could have a very sturdy legacy laptop with a beautiful 17″ 2K screen that could easily become the center of your amazing universe—especially for comfort-zone reading and looking at awesome pictures (so much better in pixels than pigments!).  After that, comes a really comfortable ergonomic chair … which, thanks to cheap Chinese quality you can also have for a very modest investment in your continued midlife mobility.  Then, relax and get ready for some exciting reading … here, there and … well, especially here … plus all the familiar navigation sites with tons of news, pix, videos, etc. in all the other virtual places you like to be, which makes our amazing Internet world go round.  Of course, if you prefer big-screen 4K artistic elegance, so much the better … or a tabloid screen to tap on … or your vanishingly small—but ever so mobile—smart screen on the fly, or all three or four … well, you’d be well up to your eyeballs in digital fare, so “Carry on Watson, the game’s afoot.” as our dear Hilarion says (you will soon find out who he is!).   And don’t forget to look up from time to time; altogether it’s almost as good as a walk in the park—don’t forget that either (!).

Recently, my first major book series was an ambitious project to re-write the underground UFO/ET classic four-volume series of Wendelle Stevens, Message from the Pleiades, the Contact Notes of Eduard “Billy” Meier, dating from the late Seventies. The original private print book publication, a translation from Swiss German to English, was a difficult project for Wendelle, the “Dean of American UFO studies,” who struggled with getting what he felt was the appropriate solution from various translators, until he finally went to press with his best distressed collaborative effort in 1979. The now famous contactee, Billy Meier, with whom he had become good friends after numerous visits, however, was not pleased with the result if only because there were so many errors in what was at best still left mostly as a “transliteration,” and so, he asked Wendelle to stop … which was done after completion of Volume 4.

And so it remained for nearly thirty years, until I, having read and been greatly moved by the original print books when they first appeared … and having had a life-changing close encounter with a second White Eagle (see Winged Messengers, below) which morphed into a very similar-looking Type-1 Pleiadian “Beamship” … wished to do a 2nd Memorial Edition as editor of the books after Wendelle passed in 2013 (he, only having seen an early version of Volume 1 in the last months before his sad demise). So a few years later, the 2nd edition 6″ x 9″ format ebooks appeared (and are now available through the BookBaby BookShop) with the following covers: 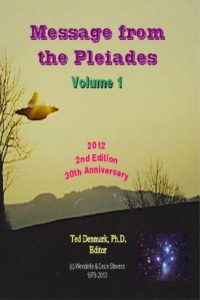 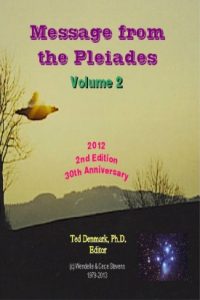 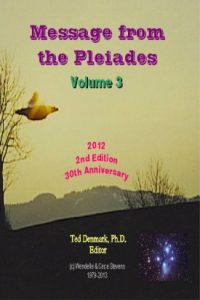 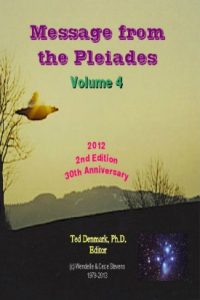 The reviews, particularly on Amazon, were good, typically 5 stars, until May of 2017 when I was surprisingly informed that the books were going to be taken down from BookBaby’s partner retail outlets because of a directive from Amazon, which had received a single letter of complaint from one Michael Horn, known for some time as the American media representative of Meier’s core group in Switzerland. As many have found out recently, the major Internet heavies like Amazon, Google and Facebook (and Microsoft and Apple in somewhat different ways) are not in business to protect First Amendment rights of authors or a free press, and, astonishingly to me, there was no way to appeal to anyone at Amazon about Horn’s hypocritical accusations calling for censorship (!) … and so, commercial availability the 30th anniversary 2nd Memorial Edition ebook of Message from the Pleiades currently remains suppressed on all but the BookBaby Bookshop website (see preceding buy-buttons)—even though the 2nd Edition was published as an authorized memorial to Wendelle by the original publisher and copyright holder (now retained by daughter CeCe Stevens). If you feel deprived of your rights to purchase ebook copies online, based solely on the complaint of the overexposed VIP celebrity evangelist Horn (whose previous work supporting Billy Meier we may yet remain grateful for), then express your opinion to Horn, Amazon and/or others to restore wider availability (and please send me a copy via Contact email on this web site).

In addition, an enhanced 8½” x 11″ ‘coffee table’ PDF ebook version, the prototype for the eventual print book edition (with original typography preserved—so much better than homogenized proprietary ebook formats) of the Wendelle Stevens Memorial 2nd Edition of Message from the Pleiades will eventually be available for download purchase via Paypal on this website (a color print-book edition itself is still too expensive to produce and a black-and-white version just too disappointing to contemplate). The finished covers look like this: 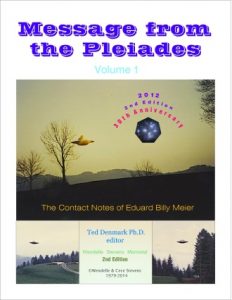 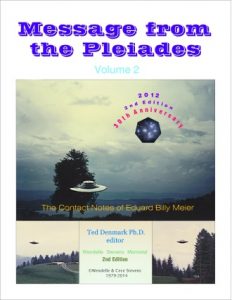 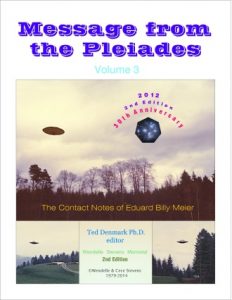 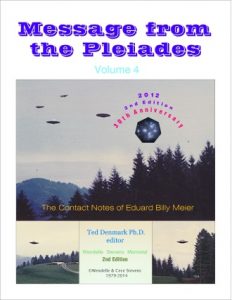 Billy and his estate and its agents deserve to have control of the official authorized editions of all his Contact Notes (if they can ever succeed in making English publication available), but future generations also deserve to have the updated, much-improved 2nd edition of the first authorized publication of them (for which, publication rights were purchased by Wendelle directly from Billy “in the day,” whatever Horn and his cadres may believe in service of their monopolistic claims).

You may also now read what Semjase and some of her Pleiadian associates think of this dispute in the latest J&T Telepresence Conferences (dialogues 87-91) in the *5 Star Series* menu dropdown, now appearing on this website (highly recommended).

My second major book series currently available in five volumes in commercial e-publication (epub & PDF) via BookBaby distribution is the original edition of *J&T 5 Star Series*: V. 1The Star Table Trance Missions, V. 2 Star Family Excursions, V. 3 Star World Ascension, V. 4 Star Time Convergence and V. 5 Star Light Reflections. These are all amazing books of 14 “Telepresence Conference” dialogues each with “ETs and Celestial Guides” (including Semjase and about 75 or so other exotic visitors from the quantum realm) done in hypnotic trance in conjunction with my wife, Julie Loar, beginning with our meeting in 2010. Each volume is dedicated to one of the five star systems in our local galactic neighborhood that have been the most instrumental in formation of the human genome over very long time spans of Earth history. In sequence with the volume numbers these star systems are Aldebaran & the Pleiades, Sirius, Arcturus, Andromeda and Cygnus-Lyra. 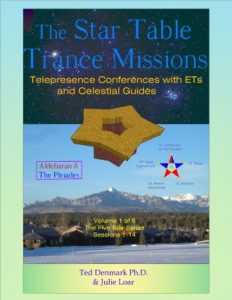 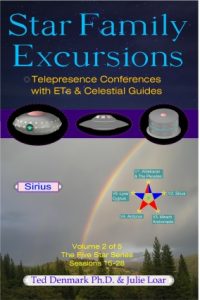 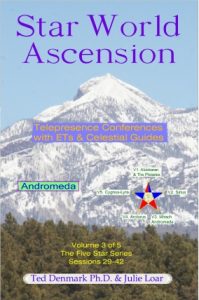 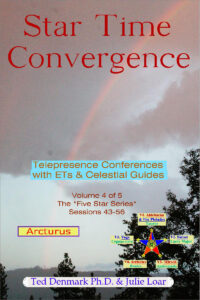 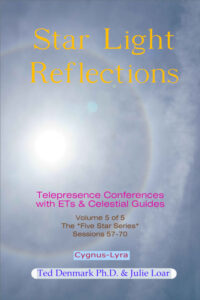 And finally, Winged Messengers, A Contactee Memoir (with the White Eagle Initiation), written in 2016 (also available at the usual online retail ebook sites as well as for the PDF on this one eventually) to gather my own contactee experiences as a Pleiadian hybrid (“Starseed”) from childhood and over the years, accounting for my personal interest in the UFO/ET “mind/ mine field,” particularly with the Pleiadians, which has always been a winding path more or less suitable for ambush by claim and counterclaim—by often improbable figures and various shadowy agency adjuncts, as real witnesses, contactees or visionaries try to find a way to make their experiences known and understood to a confused world—in contrast to those trying to cast their own nefarious secret disinformation (hence, “authentics,” “wannabes” and “disinformation agents.”). It’s been “back to the future … all over again” if you can pardon the illicit Yogi Berra meme, but of course we’ve moved on much further into hard-ball territory these days with revelations about “The Secret Space Program,” “The Breakaway Civilization” and the revisioning of the historical outcome of WWII around the “Military Industrial (Congressional, Security, etc.) Complex” conspiracies. The main surge of the history of Century 21 is now happening or just about to happen–as it did so famously in the Twentieth Century, almost exactly 100 years ago (!). 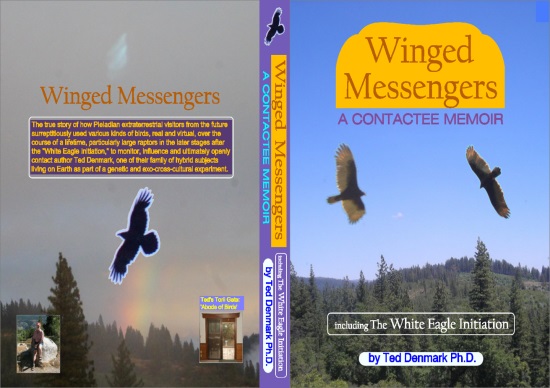 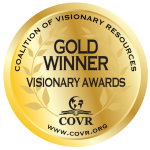